The cross is the primary symbol of Christianity. This symbol of Jesus’ crucifixion expresses the heart of Christian truth—Jesus’ death destroyed death itself and brings life to humanity. The cave churches of Cappadocia feature many painted and carved crosses, as this was a common element of Byzantine architecture. The article explores the meaning and history of the cross.

The Roman Empire used crucifixion on a cross to punish dissidents. This form of execution was terribly painful and shameful. Victims were stripped naked, whipped, then nailed to a T-shaped wooden structure. While this process was undoubtedly painful, people in the ancient world dreaded most the public disgrace of crucifixion. In fact, crucifixion was so despised that Roman citizens avoided saying the word “cross.”

In 30 A.D., Roman officials in Jerusalem convicted Jesus and sentenced him to death by crucifixion. After being mocked and whipped, Jesus was crucified on a hill outside of Jerusalem on Passover Friday. He died after a few hours on the cross. Then friends and family removed his body for burial. In Christian theology, this historical event was the pivot point of history, the moment when God’s salvation became a reality.

Why did early Christians interpret the cross as the means of salvation? Why did they think God worked through the death of Jesus to save people? The answer start with Jesus, who predicted his own crucifixion. Jesus said about himself, “The Son of Man will be betrayed …mocked and flogged and crucified. On the third day he will be raised to life” (Matthew 20:17–19). Jesus also explained the salvific significance of his impending death. He came “to give his life as a ransom for many” (Matthew 20:28). Jesus understood his own sacrificial death as the means by which God saved humanity from sin and death.

In the New Testament, Jesus’ apostles explained his death to early Christians in various ways. The Gospel of John portrays the cross as the moment of Jesus’ glorification. While Roman officials sought to humiliate him, the cross in truth “lifted up” Jesus so people could behold the love and glory of God’s Son. The apostle Paul preached of the crucifixion (1 Corinthians 1:23) because the cross was the means of salvation and focal point of history. Jesus’ sacrificial death on a cross forgives sins and creates a new covenant between God and humanity. For early Christians, the symbol of great shame had become a symbol of honor. Or to use the imagery of Revelation, the slaughtered lamb is the conquering lion. This New Testament theology of the cross explains why the it became a central symbol in latter Christian history.

"We [Christians] by the mention of Christ crucified put all demons to flight, whom you [pagans] fear as if they were gods. Where the sign of the Cross is, magic is weak and witchcraft has no strength." (Athanasius, The Life of Antony, 87) 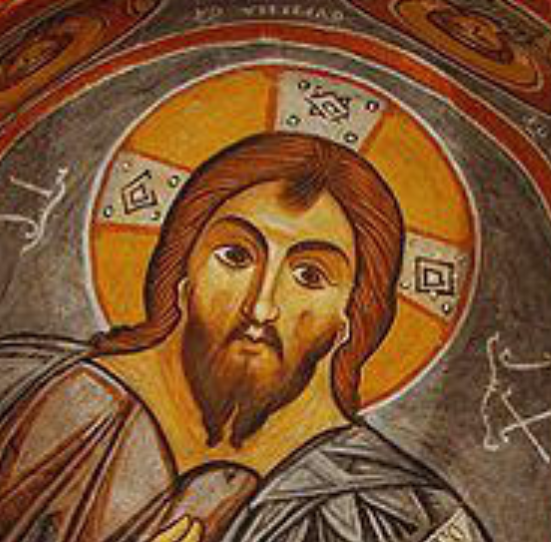 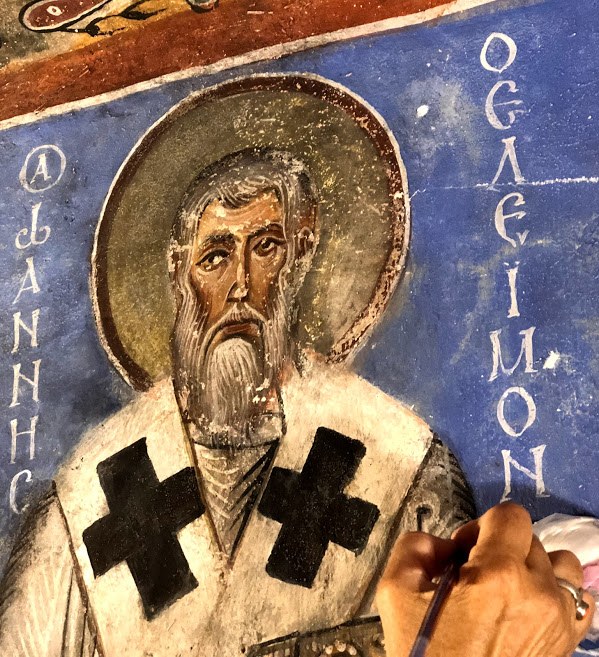 These various contexts affect the meaning of the cross. The cross always symbolizes victory, but Christians have understood the nature of “God’s victory” in various ways. 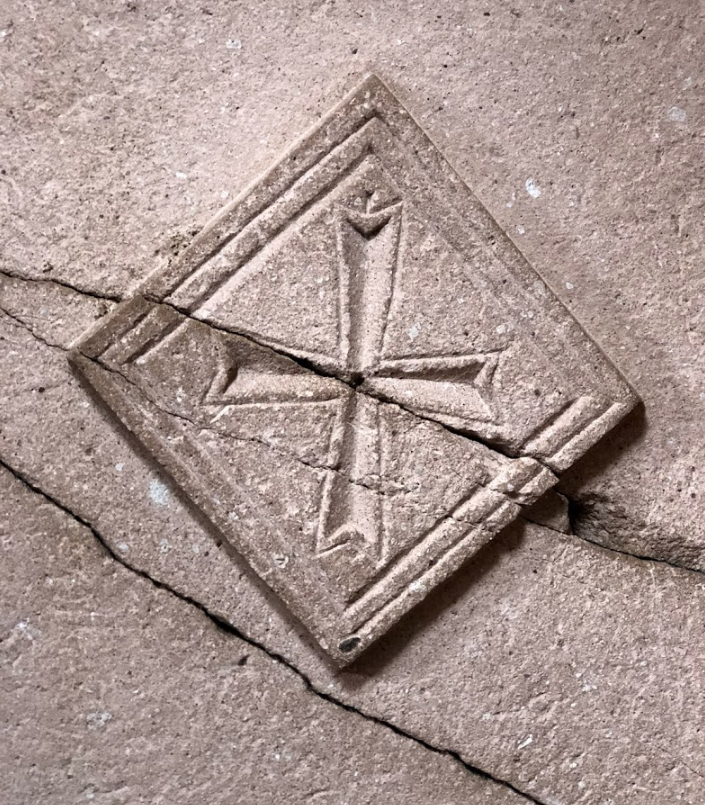 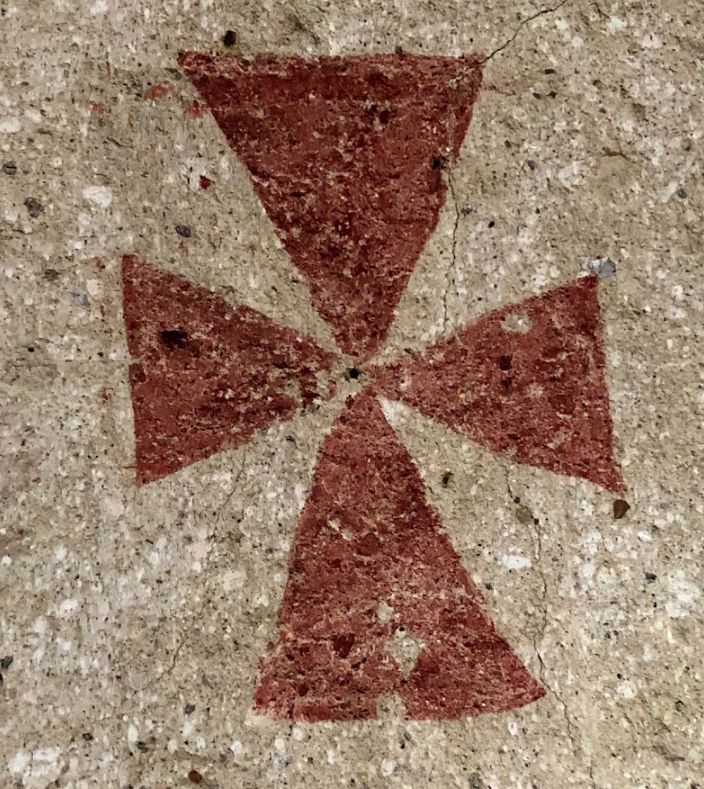 One of the most beautiful crosses, both artistically and theologically, is on the ceiling of Grape Church. In the main room of the church (naos), a jeweled cross with acanthus flowers and grapevines covers the ceiling. In the Bible, vineyards and grapevines symbolized God’s people (see Isaiah 5; Psalm 80). Jesus said in John 15:5, “I am the vine, you are the branches. Those who abide in me and I in them bear much fruit, because apart from me you can do nothing.” The ceiling design of grapes coming from the base of the cross visualizes a core Christian belief—Jesus’ death (the cross) was the basis of God’s new covenant people (the vines).

Another stunning cross is on the ceiling of St. Agathangelus Church (aka, Three Crosses Church, in Red Valley). In the middle of the ceiling, there is an ornate Greek cross within a larger circle, with smaller circles in each quadrant. On each side of this central cross, stand two braided crosses flanked by palm trees. The objects include round, curvy patterns: entwined rope, circles, and arches. This intricate design work is quite rare in Cappadocian architecture.

By 200 A.D., the T-shaped cross became a popular hand gesture and written symbol among Christians. However, they avoided making cross in public architecture to avoid persecution from Roman officials. After the (Eastern) Roman Empire became Christian, around 325 A.D., the cross became a public symbol in Christian art and society.

The cross became a common symbol in Byzantine daily life. The emperor’s crown featured a cross to symbolize Christ’s sovereign power. Monks wore a cross on their headgear. The cross also marked physical spaces like churches and graveyards. For spiritual protection against evil spirits, people wore crosses around their neck and carved them on public buildings. Christian priests blessed people by making the sign of the cross. Even new ships and farm animals were blessed with the sign of the cross.

In the medieval era, Christians esteemed and venerated the cross in various ways. Christians exalted the cross in public ceremonies. On certain feast days, the cross was exalted during the Church liturgies. On other occasions, crosses were paraded through cities and churches. These processional crosses were ornately decorated with gems, precious metals, and images of icons. Christians also took pilgrimage trips to visit churches and monasteries that housed the True Cross (legendary fragments from Jesus’ original cross). The physical cross, as a sacred relic, had become an object of adoration and spiritual power.

A Symbol of Military Victory

The cross is foremost a symbol of victory, a sign of Jesus’ triumph over death and evil. But as the Roman/Byzantine empire Christianized, the cross increasingly became a symbol of political and military power. The cross embodied the earthly power of Byzantine kings, not only the presence of God’s heavenly rule. Several key historical events contributed to this politicization of the cross.

In 312, Constantine the Great saw a vision of the cross and heard, “By this symbol you will conquer.” He painted that symbol on his soldiers’ shields then won an improbably victory at the Battle of Milvian Bridge in Italy. As Constantine vanquished other Roman generals and became the sole ruler, the people of Rome attributed his military/political success to the power of the cross. These events infused the cross with political and military meaning.

In 326–328, Constantine’s mother, Saint Helena, visited Jerusalem and (allegedly) uncovered the very cross on which Jesus died, known as the True Cross. According to the story, half of the cross remained in Jerusalem at the Holy Sepulcher Church, and Helena sent the other half to Constantinople. Within one generation, Christians throughout the Byzantine Empire were venerating the True Cross. Later, other Byzantine churches and monasteries sought to obtain fragments of the True Cross. This relic brought spiritual blessings and enhanced status. Future Byzantine emperors served as guardians of the True Cross.

In 631, the Byzantine Emperor Herakleios recaptured Jerusalem from Persian Sasanians and recovered the True Cross. After this military victory, the Feast of the Exaltation of the Cross (September 14) became a popular holiday in the Orthodox liturgical calendar.

During the Iconoclastic Period (726–843), the cross became an alternative to human icons. The iconoclasts replaced images of people with crosses in Orthodox churches. The Byzantine emperors and bishops used the cross to emphasize their “anti-idolatry” and “Christ-only” convictions. During this time, the cross became the primary, if not exclusive, image in Christian art.

All these events were key moments in the development of the cross’s meaning in Byzantine Christianity.

As the defining symbol of Christianity, the cross appears in various contexts and forms in the cave churches of Cappadocia.

Wall Writing: The Words and Symbols